Year 1998
Harolds JA. Johnson PL. Khalifa MA. Lin B. Thomas K.
Department of Radiology and Nuclear Medicine, Baptist Medical Center of Oklahoma, Oklahoma City 73112, USA.
BACKGROUND: The purpose of this study is to define the sensitivity and specificity of the gallbladder ejection fraction (GBEF) for identifying patients with various grades of histologically proven chronic cholecystitis. METHODS: Of 693 consecutive patients who had a scintigraphic GBEF determination at Baptist Medical Center of Oklahoma, 161 subsequently had a cholecystectomy at the same institution. Pathologic material was reassessed by one outside blinded reviewer, who graded the intensity of the inflammation present on a 0 (absent) to 3 (most severe) scale. RESULTS: The least square mean maximum GBEF was 23.7% for those with grade 0, 9.6% for those with grade 3, and 13.9% for those with cholesterolosis. If a normal value for GBEF is set at > 30%, the sensitivity for detecting grade 1, 2, or 3 disease was 84%, and the specificity was 26%. For grade 3 disease alone, the sensitivity was 100%, and the specificity was 26%. CONCLUSIONS: The GBEF is sensitive but not specific for chronic inflammation of the gallbladder. The GBEF appears to be useful as a screening examination in the appropriate clinical setting.

Routine diagnostic laparoscopy is unnecessary in staging tumors of the pancreatic head.

Year 1998
Wong PW. Dillard TA. Kroenke K.
Gastroenterology Service, Brooke Army Medical Center, San Antonio, Tex 78234, USA.
A patient who had taken lovastatin for 7 years received erythromycin before dental procedures. Multiple organ toxicity developed, manifested as rhabdomyolysis, acute renal failure, pancreatitis, ileus, livedo reticularis, and elevated aminotransferase values, without liver injury. No previous reports have identified multiple organ injury of this magnitude. A computer literature search identified only three other reported instances of erythromycin and lovastatin interaction. Manifestations in these previous cases consisted of rhabdomyolysis in all three, as well as elevated aminotransferase values and acute renal failure in two cases. In all the cases, the clinical presentation of organ toxicity occurred after the cessation of erythromycin therapy between day 1 and day 5. Advanced age and chronic renal insufficiency were identified as potential risk factors for drug interaction. Health care professionals should be aware of the potential interaction between these two commonly prescribed drugs, which can mimic sepsis.

Year 1998
Macaluso A. Simmang C. Anthony T.
Department of Surgery, University of Texas Southwestern Medical Center, and Dallas Veterans Affairs Medical Center, 75216, USA.
Streptococcal bacteremia is an uncommon presentation for colorectal malignancy, yet most physicians are aware of the association between Streptococcus bovis infection and these malignancies. Many are unaware, however, that other streptococcal species are associated with colon and rectal cancers. In this case report and brief review, we highlight this association and discuss a case of Streptococcus sanguis bacteremia associated with an early invasive rectal cancer.

Prompt differentiation of Addisons disease from anorexia nervosa during weight loss and vomiting.

Year 1998
DiPalma AM. Barnes SE. DiPalma JA.
Department of Health, Physical Education and Leisure, University of South Alabama, Mobile, USA.
BACKGROUND: The objectives of this study were to survey compliance and identify factors that influence continued participation with periodic colon cancer screening guidelines once patients are seen for their first screening. METHODS: The study group consisted of 95 patients who had initial fecal occult blood tests (FOBT) and flexible sigmoidoscopy (FS) in 1991 as part of a gastroenterologist-directed, aggressively managed colon cancer screening registry. Regular notices are sent to patients and their primary care provider for annual FOBT and FS at 3- to 5-year intervals. RESULTS: Of 70 (74%) reviewed, 2 had died and 3 were having colonoscopic surveillance. Thirty-two of the 65 (49%) contacted eligible study subjects were no longer participating. Reasons stated were as follows: unaware that screening was due (14), too busy (6), unpleasant experience (3), and change to insurance provider that did not cover screening (9 [commercial-3, managed care-1, Medicare-5]). CONCLUSIONS: Despite aggressive program management, 44% of nonparticipators reported that they were unaware that screening was due. Sixteen percent of those who did not continue to participate had graduated to Medicare, which did not cover screening costs. Factors that influence continued participation need to be considered in the design of public education and marketing promotions.

Year 1998
Veldkamp P. Milstone A.
Department of Internal Medicine, Vanderbilt University Medical Center, Nashville, Tenn 37232, USA.
Wegener's granulomatosis is a serious systemic vasculitis that needs to be diagnosed promptly to limit morbidity and mortality. Atypical presentations of this disease are not uncommon. This case illustrates a rare manifestation of Wegener's granulomatosis (ie, perirectal abscess) and the value of the antineutrophil cytoplasmic antibody in conjunction with supporting pathology.

Diaphragm-like strictures of the ileum associated with NSAID use: a rare complication.

Year 1998
Abrahamian GA. Polhamus CD. Muskat P. Karulf RE.
Department of Surgery, Wilford Hall Medical Center, Lackland Air Force Base, Tex, USA.
Nonsteroidal anti-inflammatory drugs (NSAIDs) are widely prescribed for many conditions including arthritis. A rare complication of their use is diaphragm-like strictures of the small and large intestines. A 65-year-old woman with a 12-year history of arthritis came to us with a 35-pound weight loss and anorexia. She had been taking piroxicam for 3 years. Evaluation including enteroclysis revealed multiple mid-ileal diaphragm-like strictures and proximal small bowel dilatation. The symptoms persisted despite discontinuance of the drug. Abdominal exploration with intraoperative enteroscopy revealed five ileal strictures within a short segment of bowel. Resection was done and completion enteroscopy showed no other strictures. The patient recovered uneventfully and had full resolution of the symptoms. We discuss the difficulties in diagnosis and management of this drug complication and briefly review the literature.

Carcinoma of the colon: an unusual cause of prolonged fever.

Year 1998
Zahid MA. Estes N. Luchi M. Hinthorn DR.
Department of Medicine, University of Kansas Medical Center, Kansas City 66160-7354, USA.
Solid tumors rarely present with fever. Among those that do, carcinoma of the colon has been infrequently reported as a primary cause of fever. This patient had carcinoma of the right colon with prolonged fever, but no evidence of infection or gastrointestinal symptoms. At surgical resection, a caecal adenocarcinoma was found with metastases to the mesentery and 10 of 40 lymph nodes. The patient's fever resolved after 3 days. The patient remained healthy during 8 years of follow-up. Right-sided colon cancer is not often considered in the complete evaluation of fever of undetermined cause.

Year 1998
Midani S. Rathore M.
Department of Pediatrics, Nemours Children's Clinic, Jacksonville, University of Florida Health Science Center, 32207, USA.
Chromobacterium violaceum infection is confined to the tropical and subtropical areas, with almost all reported cases occurring in the Southeast. The most common feature of this infection is sepsis, followed by cutaneous involvement and liver abscesses. Treatment consists of surgical drainage of purulent collections and appropriate antimicrobial therapy, such as chloramphenicol, gentamicin, imipenem, trimethoprim-sulfamethoxazole, or ciprofloxacin. Although C violaceum infection is rare, it is potentially fatal and remains an important entity for clinicians to suspect and treat appropriately.

Year 1998
Burney IA.
Department of Medicine, The Aga Khan University Hospital, Karachi, Pakistan.
Two cases of acute tumor lysis syndrome occurring in patients with hepatocellular carcinoma are reported. Both patients were treated with transcatheter chemoembolization. Tumor lysis syndrome was not anticipated in the first case and was diagnosed late. However, the second patient's syndrome was detected early and treated appropriately. Subtle changes in electrolytes may be missed because of aggressive hydration that many of these patients receive because of cisplatin therapy. I propose that all patients with large hepatoma, particularly those with a short history, be monitored closely for acute tumor lysis syndrome.

Migration of wire mesh into the intestinal lumen causing an intestinal obstruction 30 years after repair of a ventral hernia.

Year 1998
Majeski J.
Department of Surgery, East Cooper Regional Medical Center, Mt. Pleasant, SC, USA.
Wire mesh repair of abdominal wall hernias was abandoned almost four decades ago. Recently, a woman who had a wire mesh repair of an incisional hernia in 1964 came to the emergency room with a complete small bowel obstruction. The obstruction was caused by a segment of wire mesh that broke off from the abdominal wall and migrated into the small bowel lumen. During the preceding 2 years, she had been evaluated by two different gastroenterologists for chronic anemia, but they failed to obtain an evaluation of the small intestine. This case report shows that abdominal foreign bodies may migrate into the intestinal tract. I recommend that an evaluation of chronic anemia in the geriatric patient include evaluation of the small intestine. 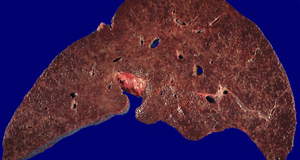