Audit of the change of outcome of peptic ulcer disease following treatment of Helicobacter pylori.

Year 1998
Jost C. Marbet UA.
Department of Internal Medicine, Kantonsspital Uri, Altdorf.
In this audit we tried to assess the effect of the detection of Helicobacter pylori on the change of outcome and symptoms of peptic ulcer disease outside well defined prospective studies, and its influence on treatment praxis by general practitioners. The study was carried out in the canton of Uri, a geographically closed area of Switzerland. The records of all patients with peptic ulcer disease diagnosed from 1991 to 1994 were evaluated retrospectively. In addition, the patients were followed by contact through their family doctors who were asked to fill out questionnaires on the immediate and long-term treatment of acute peptic ulcer, H. pylori therapy, recurrence of ulcers in light of symptoms or endoscopy, and on any surgery performed for ulcer disease. We found 453 patients with peptic ulcer disease proven by endoscopy, 134 patients presented with signs of ulcer bleeding, 45% of these had used nonsteroidal anti-inflammatory drugs previously. Only 9 of 453 patients required surgery. In 430 patients follow-up was possible (median of 18 months). H. pylori eradication was the primary treatment in 24% of the patients in 1991 and in 79% in 1994. Long-term prophylaxis with histamine H2 antagonists had been selected in 22%. Recurrence of the ulcer disease was seen in 157 patients during the follow-up period. The recurrence rate was 8% (3/39) in patients with documented H. pylori eradication, 43% (62/145) in patients with H. pylori eradication therapy without documentation of the result, 57% (31/54) in H. pylori positive and 50% (14/28) in H. pylori negative patients on long-term treatment with histamine H2 antagonists. 33% of the patients still had substantial abdominal pain despite using long-term histamine H2 antagonists as prophylaxis against recurrence, but this was the case in only 5% (2/39) after successful H. pylori eradication. The rate of successful antibiotic treatment improved substantially during this audit. This follow-up study demonstrates that patients with successfully eradicated H. pylori remain largely free of symptoms and of ulcer recurrence. Control of the eradication result seems to be necessary outside controlled studies. In contrast, symptoms and ulcer recurrence are frequent despite long-term treatment with histamine H2 antagonists. Few patients need surgery for ulcer disease today. Audits like this are a valuable method to improve acceptance and success of a new treatment modality.

[Positron-emission tomography in the diagnosis of abdominal tumors]

Year 1998
Reske SN. Guhlmann A. Schirrmeister H.
Abteilung Nuklearmedizin, Radiologische Universitatsklinik, Ulm.
PET is recognized as a powerful imaging research tool. Its clinical application has been increasing significantly in recent years. Based on pathophysiological and biochemical principles, functional PET imaging makes it possible to assess parameters of tumor biology not easily accessible to conventional imaging, such as metabolic activity, proliferation, adrenergic transmitter uptake or accumulation of cytostatics in individual tumor manifestations. For clinical application, PET imaging with 2-[F-18]fluorodeoxyglucose (FDG) is of paramount importance. This article reviews recent developments in the use of PET in the diagnosis of abdominal malignant tumors. Diagnosis of pancreatic carcinoma and related liver metastases, locoregional and distant recurrence, as well as therapy control of colorectal cancer, nodal and extranodal staging and therapy monitoring of malignant lymphoma, can be reliably performed with PET. Several appropriately labeled adrenergic transmitters are currently being developed for specific imaging of neuroendocrine tumors. Radiolabeled cytostatics such as F-18 5-FU will shortly be available for clinical use as probes for primary or secondary cytostatic resistance. Encouraging clinical results and attractive new imaging concepts promise increasing use and importance for PET for imaging of abdominal malignancies.

Imaging of the small intestine.

Year 1998
Nolan DJ.
John Radcliffe Hospital, Oxford, UK.
Endoscopy is not yet a practical procedure for examining the small intestine. A variety of radiological techniques are available for investigating suspected small intestinal disorders. Plain radiographs are the initial procedure in patients who present acutely, and barium studies are mostly used in the patients who present less acutely. Enteroclysis (small bowel enema) is proving to be an accurate barium technique. Computed tomography (CT) is useful in certain cases, particularly in established intestinal obstruction, while angiography and radionuclide studies can be extremely useful in suspected intestinal bleeding. Ultrasound has a limited role in the investigation of intestinal disorders.

Year 1998
Chautems R. Majno P. Frossard JL. Hadengue A. Morel P. Huber O.
Clinique et Policlinique de Chirurgie Digestive, Hopitaux Universitaires, Geneve.
INTRODUCTION: The results of endoscopic treatment for bleeding peptic ulcers in a teaching hospital are little reported. Most studies are published by a limited number of specialized authors with a reported success rate of 76-83%. The aim of this study is to evaluate the success rate in a teaching hospital. PATIENTS AND METHOD: We retrospectively studied 150 patients hospitalized in our service between 1994 and 1995. They comprised 59 females (median age 80.5 [24-93] years) and 91 males (median age 61.5 [26-98]). 49% were aged 70 or over. 39 patients (29%) had a past history of peptic ulcer disease, the others being admitted for an initial episode of bleeding ulcer. Biopsies for urease test were obtained in 84 patients. In this group the prevalence of Helicobacter pylori infection was respectively 88% and 58% in subjects with a history of ulcer disease and in those with an initial episode of bleeding ulcer. 46% and 54% respectively had taken nonsteroidal anti-inflammatory drugs during the previous weeks. Neither of these two risk factors was present in 9 patients without a previous history of ulcer disease; they were present in none of those with a history. RESULTS: All patients underwent emergency esogastroduodenoscopy; 48 underwent endoscopic hemostasis. 12 gastroenterologists were involved in these procedures. The definitive success rate is 81%. The success rate for a first hemostasis for a posterior bulbar ulcer is 41% vs 88% for the other localizations, a difference which is statistically significant (p = 0.002). Endoscopic hemostasis showed a higher failure rate where the bleeding stigmata was a spurting vessel (44% vs 18%) but this was not significant (p = 0.18). CONCLUSION: Endoscopic treatment for bleeding peptic ulcer is effective in a teaching hospital. The technique shows a higher failure rate for posterior bulbar ulcers. In view of the risk of recurrence, patients should be kept in hospital after a first procedure.

[Adjusting dosage of drugs in patients with kidney or liver failure]

Year 1998
Krahenbuhl S.
Institut fur Klinische Pharmakologie, Universitat Bern.
Patients with renal or liver failure have a high risk of developing adverse effects of pharmacotherapy, since they are usually treated with many drugs and elimination of these drugs may be impaired. In this article, dose adjustment of the most important drugs used in these groups of patients is discussed. While clear guidelines for dose adjustment can be worked out for patients with renal failure this is more difficult for patients with liver failure since the metabolic capacity of the liver cannot be reliably quantified. Thus, despite dose adjustment, pharmacotherapy must be constantly monitored for adverse effects in these groups of patients.

[Simultaneous laparoscopic therapy of cholecysto- and choledocholithiasis. An analysis of results]

Year 1998
Gemsenjager E.
Chirurgische Klinik, Spital Neumunster, Zollikerberg/Zurich.
The rectum and mesorectum are enclosed in a fascial sheath, the fascia propria, and represent an anatomical entity of abdominal origin. This package is a well-known anatomical and oncological base for radical rectal cancer excision. It is at present under discussion again under new aspects: The surgical and oncological quality of rectal cancer excision is largely surgeon-dependent. Modern rectal surgery is refined, with sharp, very precise dissection respecting the relevant fascial planes, identifying and protecting the autonomous pelvic nerves and achieving radical locoregional tumor clearance, thus virtually eliminating the serious problem of pelvic recurrence. In this overview the concept of total mesorectal excision (TME) is explained and open questions are discussed. It remains to be determined whether a refined and anatomically precise operative technique or the oncologic concept of TME are of primary importance, and also whether patient selection influences the results to some degree.

Year 1998
Landry P. Darioli R.
Policlinique medicale universitaire de Lausanne.
To select the travellers most likely to benefit from anti-hepatitis A (HA) antibody testing, the following criteria have been proposed: (A) being born before 1945, (B) a stay over 1 year in a developing country or (C) a history of jaundice. We present a prospective study to assess the practical use of these criteria. Following a recent survey in the general population of Lausanne showing HA seroprevalence of 52.6% in the age group over 45, we included an A1 criterion (A extended to birth before 1950). Anti-HA IgG testing and a questionnaire were proposed to all travellers presenting one or more criteria. RESULTS: Out of 1187 consecutive travellers, 176 (14.8%) had one or more criteria (219 [18.5%] when A1 was used). Criteria A applied to 8.5% of all travellers, A1 to 13.8%, B to 6.3% and C to 3.1%. Only 3% of travellers had more than one criterion. Overall seroprevalence among the selected group was 48.3%. Seroprevalence of travellers below 60 years old was under 30%, unless a second criterion was present in which case seroprevalence was 10% higher. Eighty percent of travellers with a history of jaundice were found to be positive. The use of the recommended criteria spared 94 travellers (46.3% of those tested and 7.9% of all travellers) unnecessary immunisation. Among travellers older than 60 years, a 30% economy on the total sum for immunising all of them, without any prior testing was realised. CONCLUSIONS: Among the population of travelers consulting our travel clinic, the seroprevalence for HA is lower than in the general population. We recommend that testing should be proposed only to travellers aged over 60, or with a history of jaundice, or to those with a combination of 2 out of 3 criteria.

Year 1998
Herzog D. Hammer B. Neuweiler J. Werder E.
Ostschweizerisches Kinderspital St. Gallen. dherzog@bluewin.ch
A 10-year-old, previously healthy Swiss boy suffered from repeated episodes of watery diarrhea for some months following a summer camp holiday. No etiology was found, and except for symptomatic treatment no other therapy was necessary. Five years later he was investigated because of growth failure, with a bone age of 11.5 years, but the correct diagnosis was not established. Only when he was reinvestigated at the age of 20 years, because of persistent growth failure and a bone age of 14 years, were Giardia lamblia trophozoites seen microscopically on the surface of duodenal mucosa biopsy specimens. At the same time dysgammaglobulinemia was detected which may have predisposed the gastrointestinal tract to chronic giardiasis. After a 10-day course of metronidazole the patient experienced catch-up growth and completed his pubertal development. The dysgammaglobulinemia persisted after therapy. This case showed that in patients with intestinal growth failure, catch-up growth and completion of pubertal development are possible even after the age of 20 years if nutritional supply is sufficient. Bone age determinations serve to indicate remaining growth potential. 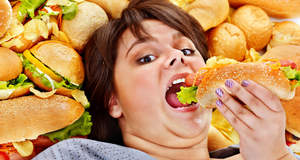