Year 1998
Espinoza R. Ohmke J. Garcia-Huidobro I. Guzman S. Azocar M.
Departamento de Cirugia Digestiva, Hospital Clinico, P Universidad Catolica, Santiago, Chile.
BACKGROUND: Acute appendicitis still constitutes a difficult diagnostic problem. AIM: To assess the experience of an University Hospital in the diagnosis of acute appendicitis and to determine the rates of negative appendectomies. PATIENTS AND METHODS: The charts of 1,075 patients operated with the diagnosis of acute appendicitis, between 1993 and 1995, were retrospectively reviewed. All resected appendices were pathologically examined. Those cases in whom pathology did not confirm the clinical diagnosis were considered as a negative appendectomy. RESULTS: There was a 12.2% rate of negative appendectomies (18.9% in women and 6.2% in men). The difference between sexes disappears in patients over 40 years old. In 49% of patients, no abnormality was detected during the laparotomy. The most frequent differential diagnosis were gynecological illnesses or diseases of the colon. DISCUSSION: The rate of negative appendectomies can be reduced with a close clinical observation of patients during their hospitalization and the judicious use of diagnostic laparoscopy.

[Neuroradiological findings in 2 cases of Wilson disease with neurological involvement] 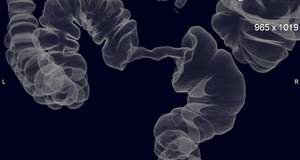