The histology of the lung in neonates with tricuspid valve disease and gross cardiomegaly due to severe regurgitation. 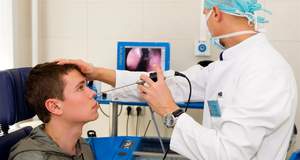