Microsurgical repair of iatrogenic injury to the vas deferens.

Sheynkin YR. Hendin BN. Schlegel PN. Goldstein M.
James Buchanan Brady Foundation, Department of Urology, New York Hospital-Cornell Medical Center, New York 10021, USA.
PURPOSE: We determined the incidence of iatrogenic injuries to the vas deferens at a tertiary care university infertility center and the results of surgical repair. MATERIALS AND METHODS: Records of 472 patients surgically explored for obstructive azoospermia between 1984 to 1996 were reviewed. Enrollment criteria included history of inguinal, pelvic and scrotal (other than vasectomy) surgery. Conventional ipsilateral and crossover vasovasostomies and vasoepididymostomies were performed. Patency rate was defined as presence of complete sperm with tails in a postoperative semen analysis. Followup included a minimum of 2 semen analyses. Only naturally conceived pregnancies were included. RESULTS: Of 472 patients 34 (7.2%) had an iatrogenic injury to the vas deferens with a mean obstruction interval of 20.5 +/- 1.9 years. Mean patient age was 36.7 +/- 1.8 years. Iatrogenic injury to the vas deferens was secondary to bilateral inguinal hernia repair in 19 patients, unilateral hernia repair in 11, renal transplantation in 2, appendectomy in 1 and spermatocelectomy in 1. Pediatric inguinal hernia repair was the most common etiology of the vasal injury (20 patients), followed by adult inguinal hernia repair (10). A total of 36 microsurgical reconstructive procedures were performed, including 20 ipsilateral and 16 crossed vasovasostomies and vasoepididymostomies. There were 26 patients (29 procedures) available for followup (mean 21.0 +/- 3.7 months). Total patency rate per procedure was 65% and pregnancy rate was 39%. Patency and pregnancy rates per conventional ipsilateral procedures were 62.5 and 35.7% and per crossover procedures 64.2 and 42.8%, respectively. CONCLUSIONS: Pediatric inguinal hernia repair is the most common cause of iatrogenic injury to the vas deferens. Results of treatment of iatrogenic injury to the vas deferens are somewhat lower than for patients with obstructive azoospermia due to vasectomy. Iatrogenic injuries are associated with longer vasal defects, impaired blood supply and longer obstructive intervals frequently resulting in secondary epididymal obstruction. Crossover reconstruction is particularly useful when contralateral testicular atrophy is present. Intraoperatively aspirated sperm should be cryopreserved for later use in case the reconstruction fails.

The value of unenhanced helical computerized tomography in the management of acute flank pain.

Dalrymple NC. Verga M. Anderson KR. Bove P. Covey AM. Rosenfield AT. Smith RC.
Department of Diagnostic Radiology, Yale University School of Medicine, New Haven, Connecticut, USA.
PURPOSE: We developed an algorithm using unenhanced computerized tomography (CT) for the management of acute flank pain and suspected ureteral obstruction. MATERIALS AND METHODS: During a 25-month interval 417 patients with acute flank pain underwent unenhanced helical CT. The final diagnosis was confirmed by additional imaging or clinical followup. For all patients who underwent additional imaging studies the official dictated radiology reports were used to determine whether the studies were recommended based on CT findings. Cases requiring intervention were evaluated to determine whether additional imaging was performed before the procedure. Medical records were reviewed and/or patients were interviewed to document the course of therapy and long-term outcome. RESULTS: Unenhanced helical CT diagnosed ureteral stone disease with 95% sensitivity, 98% specificity and 97% accuracy. Of the 38 patients requiring intervention, including nephrostomy catheters in 18, lithotripsy in 3 and ureteroscopic stone extraction in 7, additional imaging (excretory urography) was performed in only 1. Additional imaging studies generated by CT were done in 3 cases in which the dictated reports were indeterminate for ureteral stones, including negative excretory urography in 2 and retrograde urography in 1. In 1 patient in whom CT misdiagnosed a ureteral stone unnecessary retrograde urography revealed the calcification to be a gonadal vein phlebolith. Seven patients with false-negative examinations reported spontaneous stone passage with no complications. CONCLUSIONS: Unenhanced helical CT accurately determines the presence or absence of ureterolithiasis in patients with acute flank pain. CT precisely identifies stone size and location. When ureterolithiasis is absent, other causes of acute flank pain can be identified. In most cases additional imaging is not required.

Kumon H. Ozawa H. Yokoyama T. Rivas DA. Watanabe T. Chancellor MB.
Department of Urology, Okayama University Medical School, Japan.
PURPOSE: We determine whether inguinal cystoceles, a type of extraperitoneal herniation of the bladder, are responsible for symptoms consistent with prostatism in men without bladder outlet obstruction. MATERIALS AND METHODS: From January 1996 to February 1997 inguinal cystoceles were treated with surgical repair of the floor of the inguinal canal in 8 men with a relatively long history of symptoms consistent with prostatism. The diagnosis of inguinal cystoceles was based on the filling phase of video urodynamic studies done with the patient standing. The clinical outcome of surgery was assessed using the International Prostate Symptom Score and urodynamic findings. RESULTS: All inguinal cystoceles studied were physically occult but clearly detected as wide-mouthed, mild protrusions of the bladder wall in the inguinal region on cystograms obtained with the patient standing. Although clear cystoceles were present on radiography on the right side in 1 case, the left side in 2 and bilaterally in 5, apparent bilateral weakness in Hesselbach's triangle was noted in all at surgery. High detrusor opening pressure and a relatively long opening time were regarded as urodynamic parameters characteristic of this condition. These parameters and subjective symptoms dramatically improved after bilateral surgical repair of the floor of the inguinal canal. CONCLUSIONS: Inguinal cystoceles negatively affect voiding dynamics by increasing opening pressure and opening time, indicating that they should be considered in the differential diagnosis of men with symptoms consistent with prostatism. Video urodynamics is mandatory to detect this condition, which to our knowledge has been previously overlooked on radiography and urodynamics.

Matsuda T. Muguruma K. Hiura Y. Okuno H. Shichiri Y. Yoshida O.
Department of Urology, Kansai Medical University, Osaka, Japan.
PURPOSE: Childhood inguinal herniorrhaphy is a frequent causes of seminal tract obstruction. We investigate the characteristics of this obstruction, surgical techniques for reanastomosis and outcomes in patients with bilateral or unilateral obstruction caused by inguinal herniorrhaphy in childhood. MATERIALS AND METHODS: We treated 22 men an average of 30.5 years old in whom average duration of obstruction was 27.1 years. Obstruction was bilateral in 9 patients and unilateral in 13, and 14 had azoospermia preoperatively. Microsurgical 2 layer vasovasostomy and/or specific tubule epididymovasostomy was performed. RESULTS: Inguinal and crossed vasovasostomy was done in 18 and 4 patients, respectively. The distal end of the vas was found at the internal inguinal ring or in the pelvic cavity in 57.1% of the vasa and more than 3 cm. of the vas had been resected in 37%. Sperm was noted in vasal fluid in 45.2% of the vasa during the operation and the patency rate of inguinal vasovasostomy was 88.9%. Ipsilateral epididymovasostomy performed after patent inguinal vasovasostomy in 5 patients with secondary epididymal obstruction resulted in normal sperm density and 3 pregnancies. In 7 men more than 2 procedures were done. There was sperm in the ejaculate in 12 of the 14 patients who had had azoospermia preoperatively and apparently increased sperm density postoperatively in 4 of the 8 who had not had azoospermia preoperatively. Pregnancy was achieved by 7 of the 21 married men (33.3%). CONCLUSIONS: Microsurgical reanastomosis of the seminal tract resulted in high patency and pregnancy rates in cases of seminal tract obstruction caused by childhood inguinal herniorrhaphy. Patients should elect seminal tract reanastomosis or assisted reproductive technology using epididymal or testicular sperm after receiving sufficient information on each treatment modality.

Year 1998
N'Dow J. Leung HY. Marshall C. Neal DE.
Department of Urology, Freeman Hospital, Newcastle upon Tyne, United Kingdom.
PURPOSE: Bowel function may be disturbed after intestinal segments are used in urinary reconstruction. The etiology of this condition and its incidence in different patient groups is unclear. We studied the incidence of bowel disturbance in patients who underwent bladder replacement, continent diversion, enterocystoplasty for idiopathic detrusor instability and ileal conduit diversion. MATERIALS AND METHODS: We evaluated 71 patients after ileal conduit diversion and 82 after bladder reconstruction, including clam enterocystoplasty for detrusor instability in 28, neurogenic bladder dysfunction in 26 and nonneuropathic conditions in 28. We noted the severity of symptoms, such as frequency of defecation, nocturnal diarrhea, flatus leakage, fecal urgency, fecal incontinence and explosive diarrhea, as well as quality of life. RESULTS: Of the patients who underwent bladder reconstruction 24% had symptoms of bowel dysfunction preoperatively and 42% of those who were asymptomatic preoperatively described new bowel symptoms postoperatively. These symptoms were most common and severe in 54% of patients after clam enterocystoplasty for detrusor instability compared to 26% with neuropathy, 14% with a nonneuropathic condition and 15% with an ileal conduit. Compared to those in other groups patients who underwent enterocystoplasty for detrusor instability had a significantly higher incidence of nocturnal bowel movements (18 versus less than 4%, p

Year 1998
Anderson J. Carrion R. Ordorica R. Hoffman M. Arango H. Lockhart JL.
Department of Surgery, University of South Florida Health Sciences Center, Tampa, USA.
PURPOSE: We clinically define the development of an anterior vaginal wall hernia following cystectomy for the management of intractable interstitial cystitis and establish surgical technique for its correction. MATERIALS AND METHODS: Of 27 women who underwent simple cystectomy and urethrectomy for intractable interstitial cystitis an anterior vaginal wall hernia developed in 3 (71, 56 and 61 years old) at 8, 14 and 16 months, respectively, postoperatively. Clinical appearance was similar to a midline cystocele but it contained bowel contents in the form of an anterior enterocele. Anterior enterocele was associated with vaginal vault prolapse in 1 patient who was treated with transvaginal sacro-spinous colpopexy. Patients with isolated anterior enterocele required a transabdominal approach with mobilization of the intestinal hernia contents and obliteration of the intervaginal abdominal wall space. RESULTS: At 12, 19 and 33 months following reconstruction prolapse has not recurred, and sexual function was restored in 1 patient. CONCLUSIONS: These cases suggest that an extended simple cystectomy performed on women with intractable interstitial cystitis may result in a weakening of the anterior vaginal wall with resultant anterior enterocele formation. When it is associated with vaginal vault prolapse a transvaginal technique may be considered but we prefer a transabdominal approach for an isolated anterior enterocele. Prevention of this entity may be warranted at the time of cystectomy.
28
Версия для печати
Источник: https://gastroportal.ru/science-articles-of-world-periodical-eng/j-urol.html
© ГастроПортал
Перейти в раздел
Zhonghua Yi Xue Yi Chuan Xue Za Zhi
[The relationship between p53 mutation and esophageal cancer biological behavior]He Y. Li M. Shang…
Zhonghua Yi Xue Za Zhi (Taipei)
Tracheal agenesis with multiple congenital anomalies: a case report.Year 1998Wang CM. Chen SJ. Lu…
Z Gastroenterol
Quantification of hepatitis C virus RNA by RT-PCR in comparison to the branched DNA method.Year…
Zentralbl Gynakol
[Echinococcosis--case report and review of the literature]Year 1998Moller S. Kairies M. Krause… 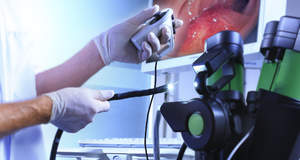