Year 1998
Tomita Y. Katagiri A. Saito K. Imai T. Saito T. Tanikawa T. Terunuma M. Nishiyama T. Takahashi K.
Department of Urology, Niigata University School of Medicine, Japan.
BACKGROUND: Initial results of adoptive immunotherapy using lymphokine-activated killer (LAK) cells and interleukin-2 (IL-2) appeared to offer promise for treating renal cell cancer (RCC). However, lower response rates were seen in subsequent trials, and the long-term results of this treatment method have not been fully reported. In this study, we examine long-term results of adoptive immunotherapy using LAK cells, IL-2, and cyclophosphamide (LAK/IL-2/CPM therapy). METHODS: We administered 10 courses of therapy to 9 patients with advanced RCC. One patient had liver and para-aortic lymph node metastases; the others had only lung metastases. The clinical effects were initially evaluated 4 weeks after therapy and follow-up was continued for periods of 43 to 76 months. RESULTS: The 4-week evaluation revealed 3 complete responses (CR), 3 partial responses (PR), 1 minor response (MR), 1 patient with no change in disease status (NC), and 2 patients whose disease progressed (PD). One CR patient remained apparently free of disease for 43 months. After tumors recurred in the lung of another CR patient further disease progression was suppressed by IL-2 administration until the patient died from other causes at 46 months. The third CR patient showed tumor recurrence in the lung and was re-treated with the same LAK/CPM/IL-2 therapy. Lung tumors decreased in size (PR), but the patient died due to brain metastasis 2 months after the second round of treatment. The 2 initial PR patients, as well as the MR and NC patients, developed regrowth or new metastatic lesions within 2 to 15 months following therapy. The 2 PD patients died 2 and 9 months after therapy. CONCLUSION: Long-term effects of LAK/IL-2/CPM therapy were not correlated with the maximal response observed 4 weeks after therapy. Although LAK/IL-2/CPM therapy appears suitable for use as induction therapy in RCC, our data suggest that long-term suppression will require surgical removal of remnant tumors or more intensive maintenance therapy.

Year 1998
Mitsui T. Kobayashi S. Matsuura S. Kakizaki H. Mori T. Minami S. Koyanagi T.
Department of Urology, Hokkaido University School of Medicine, Sapporo, Japan.
OBJECTIVES: Urodynamic studies were performed to clarify vesicourethral dysfunction and recovery after rectal surgery for cancer. MATERIALS AND METHODS: At 1, and 6 to 1 2 months after rectal surgery interviews and urodynamic studies (UDS) were performed on 51 consecutive patients, all without a prior history of voiding disorder (40 males and 11 females; median age, 60 years). Patients were divided into 2 groups, either with (preserved group, n = 17) or without (nonpreserved group, n = 34) preservation of the bilateral pelvic plexus during surgery. Comparisons of voiding status and urodynamic parameters were made between the 2 groups. RESULTS: By 1 and 6 months after the operation normal voiding was achieved in 71% (12/17) and 100% (13/13) of patients in the preserved group, and 6% (2/34) and 30% of patients (9/30) in the nonpreserved group, respectively (P < 0.001). Attainment of normal voiding in the nonpreserved group was preceded by the recovery of bladder sensation, while UDS demonstrated increases in vesical compliance and the disappearance of vesical denervation supersensitivity. CONCLUSION: A nerve-sparing procedure during radical surgery for rectal carcinoma preserved vesicourethral function. The urodynamic parameters relevant to postoperative recovery of voiding function were improved vesical compliance, disappearance of vesical denervation supersensitivity, and recovery of a bladder filling sensation.

Year 1998
Mitsui T. Shinno Y. Kobayashi S. Matsuura S. Shibata T. Ameda K. Koyanagi T.
Department of Urology, Hokkaido University School of Medicine, Sapporo, Japan.
BACKGROUND: Vesicourethral function returns after radical rectal surgery during the first year but rarely progresses after 1 year. We examined the urodynamics of patients whose voiding dysfunction remained after 1 year, and treated several with a modified sphincterotomy procedure similar to radical transurethral resection of the prostate. METHODS: We analyzed the urodynamic features of vesicourethral dysfunction in 16 male patients with persistent voiding dysfunction for more than 1 year following radical surgery for rectal carcinoma. Seven patients elected to undergo radical transurethral resection of prostate (radical TUR-P) for the relief of their persistent voiding dysfunction. RESULTS: The mean bladder volume at the first desire to void was 210 mL, the mean maximal bladder capacity was 343 mL, and the mean vesical compliance (Cves) was 27.1 mL/cm H2O. All patients demonstrated either vesical denervation supersensitivity (Vds) or uninhibited contraction. The mean maximal urethral closure pressure was 43.9 cm H2O, and urethral denervation supersensitivity was found in 77.8% (7/9), and sphincter dyssynergia in 66.7% (6/9) of patients. After radical TUR-P, 5 patients became free from the use of self-catheterization, 1 patient had a reduced residual urine rate, and 1 patient was unchanged, but no patient noted a change in urinary control. CONCLUSION: Urethral dysfunction after radical rectal surgery was caused by failure of the bladder to empty along with an underactive detrusor. Radical TUR-P was effective in restoring voiding function in a selected group of these patients.

Testicular metastases from carcinoma of the bile duct: a case report.

Year 1998
Tozawa K. Akita H. Kusada S. Hayashi Y. Sasaki S. Ueda K. Kohri K.
Department of Urology, Holy Spirit Hospital, Nagoya, Japan.
A 41-year-old man was admitted to our hospital with chief complaints of painless tumor in the left scrotal contents and loss of body weight. As the tumor was suspected of being a neoplastic lesion, left radical inguinal orchiectomy was carried out. Histopathological examination showed metastatic adenocarcinoma of the bile duct. Metastatic carcinoma to the testicle, epididymis, and their tunics is unusual and testicular metastases from adenocarcinoma of the bile duct is extremely rare. A case of testicular metastases from carcinoma of the bile duct is reported and the literature reviewed.

Year 1998
Yasumoto R. Kawano M. Kawanishi H. Shindow K. Hiura A. Kim E. Ikehara T.
Department of Urology, Osaka Municipal Juso-shimin Hospital, Japan.
A 10-year-old boy, who had a mild inguinal hernia in his left scrotum, was referred to our clinic because of redness of the scrotal skin and tenderness of the left scrotal contents. Scrotal echography showed a hypoechoic lesion around the normal testis and epididymis. Because torsion of either the testis or testicular appendage was suspected, the scrotum was opened and 1.5 mL of purulent fluid was observed in the tunica vaginalis with inflammatory tissue around the testis and epididymis. On the first postoperative day, a low grade fever and abdominal tenderness persisted, however, the abdomen was flat and soft. There was no marked tenderness over McBurney's point, but there was moderate tenderness over Lanz's point on deep palpation. Abdominal sonography and magnetic resonance imaging revealed abscess formation between the bladder and the sacrum. With a diagnosis of perforation of the appendix, a laparotomy was performed. The inguinal hernia sac could not be observed on inspection, and it was not possible to palpate the left side because of severe adhesion due to infection. Also, the neck of the right inguinal sac could not be seen. The appendix specimen was gangrenous. On the second postsurgical day, all symptoms and signs disappeared. We present this rare condition and discuss the difficulty in establishing a diagnosis.

Year 1998
Celebi I. Guzelsoy M. Yorukoglu K. Kirkali Z.
Department of Urology, Dokuz Eylul University School of Medicine, Izmir, Turkey.
The nature of polypoid masses within the gallbladder is difficult to define preoperatively. Tumors larger than 1 cm in size are strongly related to malignancy, but they are not always primary tumors of the gallbladder. We present a patient who underwent radical surgery for renal cell carcinoma and the preoperative finding of a polypoid mass within the gallbladder turned out to be a metastatic lesion.

Carcinoembryonic antigen positive adenocarcinoma of a female urethral diverticulum: case report and review of the literature. 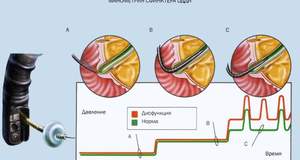