Year 1998
Kawashima I. Hudson SJ. Tsai V. Southwood S. Takesako K. Appella E. Sette A. Celis E.
Cytel Corporation, San Diego, California 92121, USA.
One approach to development of specific cancer immunotherapy relies on the induction of cytotoxic T lymphocytes (CTL) specific for tumor-associated antigens (TAA). Induction of TAA-specific CTL could be used towards the eradication of established tumors, or to prevent their dissemination or recurrence after primary treatment. The present study identifies a set of CTL epitopes from TAA frequently found on solid epithelial tumors such as breast, lung and gastro-intestinal tumors. Specifically, HLA-A2.1 binding peptides from the MAGE2, MAGE3, HER-2/neu and CEA antigens were tested for their capacity to elicit in vitro anti-tumor CTL using lymphocytes from normal volunteers and autologous dendritic cells as antigen-presenting cells. A total of 6 new epitopes (MAGE2[10(157)], MAGE3[9(112)], CEA[9(691)], CEA[9(24)], HER2[9(435)] and HER2[9(5)]) were identified which were capable of specifically recognizing tumor cell lines lines expressing HLA-A2.1 and the corresponding TAA. In one case (CEA[9(24)]), induction of vigorous anti-tumor CTL responses required epitope engineering to increase HLA-A2.1 binding affinity. Finally, most of the newly identified epitopes (5 out of 6) were found to be highly crossreactive with other common HLA alleles of the A2 supertype (A2.2, A2.3, A2.6 and A6802), thus demonstrating their potential in providing broad and non-ethnically biased population coverage. The results are discussed in the context of the development of multi-epitope-based therapies with broad applicability for patients suffering from commonly found tumors.

Year 1998
Polvi A. Arranz E. Fernandez-Arquero M. Collin P. Maki M. Sanz A. Calvo C. Maluenda C. Westman P. de la Concha EG. Partanen J.
Tissue Typing Laboratory, FRC Blood Transfusion Service, Helsinki, Finland.
Genetic susceptibility to celiac disease (CD) is strongly associated with DQA1*0501 and DQB1*02 (= DQ2). To study whether CD patients without DQ2 share other MHC class II or TNF alleles, we screened DQ2-negative patients in Finland and Spain. Twelve of 84 (14%) Finnish patients and 13 of 189 (6%) Spanish patients were negative for DQ2. We observed that all but two of altogether 25 DQ2-negative patients had the DR4 DQ8 haplotype, or either DQA1*0501 or DQB1*02 alone. Also, all but three were positive for DRB4*01. The only patients without any of these alleles were both positive for DR 13. There was a clear difference between Finland and Spain: Ten (83%) of the 12 Finnish DQ2-negative patients but only five (38%) of the 13 Spanish patients had DRB1*03, DQA1*03, DQB1*0302 (= DQ8) alleles. Of the Spanish patients, eight (62%) had DQB1*02 without DQA1*0501 and three (23%) had DQA1*0501 without DQB1*02. None of the TNF, TAP, or DPB1 alleles was found to be significantly associated with CD. Our results indicate that in addition to the DQ2 heterodimer, the other major risk alleles for CD are DR4 DQ8, and either DQA1*0501 or DQB1*02 alone. Patients without these alleles appear to be very rare, only two (0.7%) were identified in altogether 253 patients tested.

Year 1998
Chen X. Cooksley G. Sing G.
Clinical Research Centre, Royal Brisbane Hospital Research Foundation, Australia.
We compared the Vbeta TCR repertoires of CD8+ peripheral blood lymphocytes between 21 patients with chronic hepatitis B (CHB) and 9 healthy individuals, using RT-PCR analysis. Several differences were seen between CHB patients and controls, including a marked increase in the expression of two to five Vbeta families in the CHB patients. There was no evidence for a superantigen effect, although an increase in Vbeta7 was seen in 64% of patients. A significant under-expression of Vbeta families were also detected, particularly in patients with active liver disease in which under-expression of Vbeta14 and Vbeta15 was associated with acute exacerbations of liver disease. We also did a longitudinal analysis of the TCR repertoire in two patients over a period of 6 months, from the initiation of a disease flare to its resolution. One patient continued to experience spontaneous flares following the completion of this study, while the other patient underwent spontaneous remission with long-term (> 12 months) loss of HBeAg following resolution of the flare. The TCR repertoires of both patients were altered during the flare, and there was a higher degree of TCR variability in the patient who went into remission. 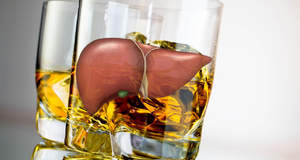