[Langerhans cell histiocytosis in the elderly]

Year 1998
Gerlach B. Stein A. Fischer R. Wozel G. Dittert DD. Richter G.
Klinik und Poliklinik fur Dermatologie, Medizinische Fakultat Carl Gustav Carus, Technische Universitat Dresden.
Disseminated Langerhans-cell-histiocytosis (LCH) is most frequent in children at the age of 1-3 years, seldomly seen in adults and extremely rare in the elderly. The clinical course may be acute, subacute or chronic, progressive or stationary. Spontaneous remissions are possible, but rare. In elderly patients often the disease is at first limited to the skin before it becomes systemic. A 73-year-old female patient with chronic stationary disease of 3.5 years duration died 4 weeks after the acute dissemination of her LCH. At the beginning, her skin and liver involvement had responded to chemotherapy with etoposide. Six months later cutaneous relapse occurred with a more disseminated pattern involving the external auditory meatus. Treatment with topical nitrogen mustard followed by thalidomide produced marked improvement. As complications an irritation after topical application of nitrogen mustard and a maculo-papular exanthem after thalidomide were noted. No further visceral involvement was documented for one year. Then the patient developed acute disseminated disease and died within four weeks. As LCH may show a highly unpredictable course with progress and spontaneous remission, the prognosis is difficult. Any therapeutical procedures should be based on the actual state of the disease as determined by careful examination of the organs most commonly involved.

[Acanthosis nigricans maligna. Case report and review of the literature]

Year 1998
Lenzner U. Ramsauer J. Petzoldt W. Meigel W.
Abteilung fur Dermatologie, Allgemeines Krankenhaus St. Georg, Hamburg.
More than 400 cases of acanthosis nigricans maligna (ANM) and 23 cases of "florid cutaneous papillomatosis" (FCP) were published. ANM is an obligatory paraneoplastic symptom. A 28-year old female patient with an adenocarcinoma of the stomach presented with ANM. We review the number and types of associated cancer with ANM. In most cases and adenocarcinoma of the gastrointestinal tract has been present. We feel that FCP is not an entity of its own but a variant of ANM; the literature supports this view. 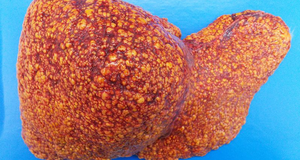