Omental evisceration after laparoscopic treatment of a tubal pregnancy. A case report and review of the literature.

Haeusler G. Tempfer C. Gitsch G. Hanzal E.
Department of Gynecology and Obstetrics, University of Vienna, Austria.
The increasing use of the laparoscopic surgery in the management of gynecologic diseases resulted in an increasing incidence of complications and the development of new complications. Postoperative complications are uncommon after laparoscopy. The most common complication is incisional herniation. A rare form of port-associated complications is omental evisceration. Since herniation through trocar incision sites might implicate severe complications, the use of safety techniques should be applied on a routine basis to reduce laparoscopy-associated morbidity.

Three-dimensional ultrasonographic assessment of the umbilical cord during the 2nd and 3rd trimesters of pregnancy. 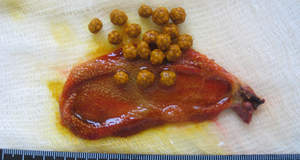