[Immediate and early reinterventions in the surgery of colorectal cancer]

Year 1998
Jitea N. Angelescu N. Burcos T. Busu G. Cristian D. Popa E. Mircea N.
Clinica de Chirurgie, Coltea.
Out of 584 cases submitted to colorectal surgery 461 (78.92%) were performed for cancer. Thirty-three patients (7.16%) necessitated immediate (1) or precocious reinterventions for bleeding, fistulae, peritoneal infections, bowel occlusion, necrosis or stenosis of the iliac anus. We are out the technical procedures chosen for each class of complications asking for reintervention. We registered 4 deaths, in aged patients with hard associated morbidity, with emergency reinterventions. We appreciate that a correct preoperative preparation reduces the rate of reintervention and an early reintervention reduces the post-operative mortality.

Year 1998
Munteanu D. Duca S. Vlad L. Paraian I. Toganel D. Iancu C. Pop F. Radu H. Puia C. Bala O. Bud O. Nagy Z. Leuca D. Bordei R. Popazu R.
Clinica Chirurgie III, Universitatea de Medicina si Farmacie Iuliu Hatieganu, Cluj-Napoca.
The aim of the conservative treatment of postoperative external digestive fistulae is to obtain a reduction of the output, thus favoring spontaneous closure and shortening outcome. A retrospective comparative study has been performed on two groups of patients with postoperative anastomotic gastrointestinal and pancreatic fistulae. Group A included 18 cases (14 anastomotic, 4 pancreatic fistulae) receiving conventional treatment only. Group B included 25 cases (18 anastomotic and 7 pancreatic fistulae) in which Sandostatin was associated to conventional therapy, using daily doses ranging from 0.1 mg to 0.3 mg, administered after variable intervals after fistulas' occurrence. Duration of treatment ranged from 1 to 25 days. In group A, 27.77% of the cases were cured in comparison with group B in which the healing rate increased to 56%. Global hospital mortality rate was 25.58% (11 cases). In group A this was 44.44% (8 cases) in comparison with group B with 12% (3 cases) only. As a conclusion of our study, the use of Sandostatin is remarkable effective in the treatment of external digestive postoperative fistulae. Thus a doubling of healing rate and a reduction by 73% of mortality rate was achieved.

Year 1998
Bud V. Copotoiu C. Coros F. Budisca O. Serba N.
Clinica Chirurgie I, Universitatea de Medicina si Farmacie, Tg.-Mures.
In this paper the authors present a study of pancreatic fistula after cephalic duodenopancreatectomy concerning the incidence, importance and the therapeutic features in a number of 37 patients operated between 1.Jan.1990-1.Jan. 1997 at the 1st Department of Surgery of Clinical County Hospital of Targu-Mures. A number of 8 patients (22%) had pancreatic fistula; a half of them were treated by surgical reintervention, and the second half by conservative procedures.

Year 1998
Constantinoiu S. Chiru F. Mates IN. Pop D. Cochior D. Barla R. Dinu D. Predescu D. Predescu V.
Clinica de Chirurgie, Spitalul Clinic Sfanta Maria, UMF Carol Davila, Bucuresti, Romania.
Pseudomyxoma peritonei (PMP) is an uncommon clinical entity, lacking a precisely defined etiopathogenesis. Its clinical features are not specific and diagnosis is difficult. We analysed 10 patients, all of them women, whom we had treated surgically in combination with intraperitoneal chemotherapy. Postoperative complications had been minimal and no death had occurred. 5 patients were followed up in time, 4 of them presenting a favourable evolution (2 required reintervention), and 1 patient decreased. We analysed up-to-date therapeutic approaches and the benefit of their combinations in order to identify the optimal therapeutic strategy. We consider that the combinations surgery + intraperitoneal chemotherapy or surgery + intracavitary radiotherapy are the most effective up to date.

Year 1998
Sarbu V. Unc O. Bratu M.
Clinica a II-a Chirurgie, Spitalul Clinic Judetean, Constanta.
The authors are presenting a new surgical technique in the therapeutical arsenal of the II-nd Surgery Clinic, County General Hospital, Constanta starting with this year, 1997, for the surgical treatment of the uncomplicated hydatid cyst of the liver. Without any present evaluation of the results, the article describes the technique in accordance to the world scientific literature. This procedure consists of a minimum cystotomy with the extraction of the proligerous membrane and tight cystorafta after introducing 9/1000 sodium chloride in relative tension. The minimum approaching incision, the short time of the operation, the elimination of the "annoying" cavitary and intra-abdominally drin tubes, the fast social reintegration include this technique in the group of the minimum invasive surgical procedures and recommend its application in the uncomplicated hydatid cyst of the liver.

[Anterior resection of the rectum via laparoscopy]

Year 1998
Vasilescu C. Tomulescu V. Calin I. Nuraltay E.
Clinica Chirurgie Generala Fundeni.
Of the newer laparoscopic procedures for colorectal cancers the abdominoperineal resection of the rectum was previously communicated in this journal. The laparoscopic anterior resection is a more technically demanding operation. We report the case of 63 years old women with a rectal cancer at 9 cm from the anus. The procedure was realised under general anaesthesia, with a urinary catheter in place. An blunt obturator was introduced into the uterine cavity and used to manipulate the uterus during the procedure. After establishing of the pneumoperitoneum, a 30 degrees telescope was introduced through the umbilical port (10 mm). The 30 degrees telescope allows visualization of the splenic flexure and rectal side wall. The main steps of the procedure were the exploration of the abdominal cavity, mobilization of the descendent colon and sigmoid, exposure of the left ureter, division of the left sided peritoneal leaf and division of the inferior mesenteric vessels. The anterior dissection of the rectum was facilitated by manipulation of the uterus. The rectum was then mobilized with the "abdominalization of the tumor". A 5 cm left paramedian vertical incision was performed; through this incision a stapler was introduced and the rectum was transected 5 cm under the tumor. The rectum with the tumor, the sigmoid and mesosigmoid were exteriorized through the incision; the sigmoid was divided with a linear stapler cutter 20 cm above the tumor and the specimen was removed extracorporeally. The anvil of a circular stapler was secured in the left colon and returned in the abdominal cavity. The body of the stapler was inserted into the rectal stump through the anus and connected intracorporeally to the anvil. The postoperative evolution was simple; flatus and feces were passed at 48 hours. The patient was discharged to home after 6 days, 13 months after operation she has no morbidity.

[A rare cause of postoperative digestive hemorrhage] 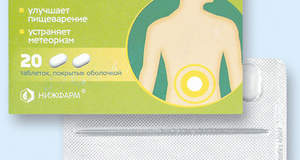