Year 1998
Lobentanz EM. Krasznai K. Gruber A. Brunner C. Muller HJ. Sattler J. Kraft HG. Utermann G. Dieplinger H.
Institute of Medical Biology and Human Genetics, University of Innsbruck, Austria.
Lipoprotein(a) [Lp(a)] consists of LDL and the glycoprotein apolipoprotein(a) [apo(a)], which are covalently linked via a single disulfide bridge. The formation of Lp(a) occurs extracellularly, but an intracellular assembly in human liver cells has also been claimed. The human apo(a) gene locus is highly polymorphic due to a variable number of tandemly arranged kringle IV repeats. The size of apo(a) isoforms correlates inversely with Lp(a) plasma concentrations, which is believed to reflect different synthesis rates. To examine this association at the cellular level, we analyzed the subcellular localization and fate of apo(a) in stably transfected HepG2 cells. Our results demonstrate that apo(a) is synthesized as a precursor with a lower molecular mass which is processed into the mature, secreted form. The retention times of the precursor in the ER positively correlated with the sizes of apo(a) isoforms. The mature form was observed intracellularly at low levels and only in the Golgi apparatus. No apo(a) was found to be associated with the plasma membrane. Under temperature-blocking conditions, we did not detect any apo(a)/apoB-100 complexes within cells. This finding was confirmed in HepG2 cells transiently expressing KDEL-tagged apo(a). The precursor and the mature forms of apo(a) were found in the ER and Golgi fractions, respectively, also in human liver tissue. From our data, we conclude that in HepG2 cells the apo(a) precursor, dependent on the apo(a) isoform, is retained in the ER for a prolonged period of time, possibly due to an extensive maturation process of this large protein. The assembly of Lp(a) takes place exclusively extracellularly following the separate secretion of apo(a) and apoB.

Properties of overlapping EREs: synergistic activation of transcription and cooperative binding of ER.

Year 1998
Massaad C. Coumoul X. Sabbah M. Garlatti M. Redeuilh G. Barouki R.
INSERM Unite 99, Hopital Henri Mondor, Creteil, France.
We have designed a novel estrogen-responsive unit, overERE, which consists of two overlapping ERE separated by 5 bp (center-to-center). In gel retardation assays, this sequence forms a low-mobility complex that migrates like an estrogen receptor tetramer. The receptor-overERE complex was specific and was supershifted by anti-ER H222 antibodies. Dose response studies showed that the formation of the receptor tetramer-overERE complex was cooperative. Truncated receptors were used to assess the contribution of the receptor domains. Deletion of the E domain of the ER prevented the formation of an ER-tetramer complex, which reflects a novel function of this receptor domain. In transfection experiments, 17-beta-estradiol activated transcription from an overERE-containing promoter 4-6 times better than from an ERE-containing promoter. This synergistic effect was observed using either the natural hormone (17-beta-estradiol) or xenoestrogens (phenol red, chlordane). We conclude that two overlapping estrogen-responsive elements can elicit synergistic induction of transcription.

Year 1998
Ngo EO. LePage GR. Thanassi JW. Meisler N. Nutter LM.
Department of Pharmacology, Medical School, University of Minnesota, Minneapolis 55455, USA.
Major differences in the metabolism of vitamin B6 in various cancers compared to their normal cellular counterparts have been documented. In particular, pyridoxine- 5'-phosphate oxidase (PNPO), the rate-limiting enzyme in pyridoxal 5'-phosphate (PLP) biosynthesis, is absent in liver and neurally-derived tumors. We show that the expression of PNPO is developmentally regulated not only in liver but also in brain. Specifically, PNPO activity in fetal brain tissue is 7.5-fold lower than that found in adult brain tissue. Furthermore, the isolation and characterization of a PNPO cDNA are described. The isolated cDNA was verified to be the authentic PNPO cDNA on the basis of two criteria. First, the translated product from the PNPO cDNA is immunologically reactive to a polyclonal PNPO antibody. Second, PNPO negative hepatoma cell lines stably transfected with the PNPO cDNA express enzymatically active PNPO protein. The availability of these biological reagents will not only facilitate in depth investigations of the reasons for the absence of PNPO in liver and brain malignancies but also aid in an understanding of the biochemical regulation of B6 metabolism in development.

The ring fragmentation product of thymidine C5-hydrate when present in DNA is repaired by the Escherichia coli Fpg and Nth proteins.

Year 1998
Jurado J. Saparbaev M. Matray TJ. Greenberg MM. Laval J.
Groupe Reparation des lesions Radio- et Chimio-Induites, UMR 1772 CNRS, Institut Gustave Roussy, Villejuif, France.
Various forms of oxidative stress, including gamma-radiolysis and UV irradiation, result in the formation of damaged bases. (5R)-Thymidine C5-hydrate is one of several modified nucleosides produced from thymidine under these conditions. N-(2-Deoxy-beta-D-erythro-pentofuranosyl)-N-3-[(2R)-hydroxyisobutyric acid]urea or alphaRT is the respective fragmentation product formed from (5R)-thymidine C5-hydrate upon hydrolysis. This modified nucleoside has potential mutagenic or lethal properties. No enzymatic activity responsible for the removal of alphaRT has been identified. We report here that when present in DNA, alphaRT is a substrate for two purified enzymes from Escherichia coli involved in the repair of oxidized bases: the Nth and the Fpg proteins. The Fpg protein removes the alphaRT lesion more efficiently than the Nth protein. This is the first example of efficient excision of a ring-opened form of a pyrimidine by the Fpg protein. The high efficacy of the Fpg protein suggests that it is likely to be involved in vivo in the excision of alphaRT. The kinetics of the reaction of the Fpg protein with DNA containing alphaRT suggest substrate inhibition. Duplex oligodeoxynucleotides containing alphaRT positioned opposite T, dG, dC, and dA were cleaved efficiently by both enzymes, although the profiles of activity of the two enzymes were different. The Nth enzyme preferentially excises alphaRT when opposite a dG, followed by alphaRT.dA, alphaRT. T, and alphaRT.dC. For the Fpg protein, the order is alphaRT.dC >/= alphaRT.dG approximately alphaRT.T > alphaRT.dA. Moreover, we show that human cell extract exhibits an activity that excises alphaRT from an oligonucleotide, suggesting that human homologues of the Nth and/or Fpg proteins could be involved in repair of this lesion in human cells.

Year 1998
Burczynski ME. Harvey RG. Penning TM.
Department of Pharmacology, University of Pennsylvania School of Medicine, Philadelphia 19104-6084, USA.
The bioactivation of polycyclic aromatic hydrocarbons (PAHs) to their ultimate carcinogenic forms proceeds via the formation of proximate carcinogen trans-dihydrodiols. Previous studies demonstrated that rat liver 3 alpha-hydroxysteroid dehydrogenase/dihydrodiol dehydrogenase (3 alpha-HSD/DD), a member of the aldo-keto reductase (AKR) superfamily, oxidizes PAH trans-dihydrodiols to redox-cycling o-quinones. Multiple closely related AKRs exist in human liver; however, it is unclear which, if any, participate in PAH activation by catalyzing the NADP+ -dependent oxidation of PAH trans-dihydrodiols. In this study, cDNAs encoding four human DD isoforms were isolated from HepG2 cells using isoform-selective RT-PCR. The recombinant proteins were overexpressed in Escherichia coli, purified to homogeneity, and kinetically characterized. Calculation of KM and kcat values of each isoform for model substrates revealed that they possessed enzymatic activities assigned to native human liver DD1, DD2, DD4, and type 2 3alpha-HSD (DDX) proteins. The ability of human DDs to oxidize the potent proximate carcinogen (+/-)-trans-7,8-dihydroxy-7, 8-dihydrobenzo[a]pyrene (BP-diol) was then examined. A reverse phase HPLC radiochemical assay demonstrated that all four isoforms oxidize (+/-)-BP-diol in the following rank order: DD2 > DD1 > DD4 > DDX. Each DD consumed the entire racemic BP-diol mixture, indicating that both the minor (+)-S,S- and major (-)-R,R-stereoisomers formed in vivo are substrates. First-order decay plots showed that DD1 and DD2 displayed preferences for one of the stereoisomers, and circular dichroism spectroscopy indicated that this isomer was the (+)-7S, 8S-enantiomer. The products of these reactions were trapped as either glycine or thiol ether conjugates of benzo[a]pyrene-7,8-dione (BPQ), indicating that the initial oxidation product was the reactive BPQ. Thus, human liver possesses multiple AKRs which contribute to PAH activation by catalyzing the NADP+-dependent oxidation of PAH trans-dihydrodiols to redox-active o-quinones.

The gene for human protein Z is localized to chromosome 13 at band q34 and is coded by eight regular exons and one alternative exon.

Year 1998
Fujimaki K. Yamazaki T. Taniwaki M. Ichinose A.
Department of Molecular Patho-Biochemistry, Yamagata University School of Medicine, Japan.
Human protein Z is a vitamin K-dependent plasma glycoprotein, deficiency of which leads to a mild bleeding tendency. Protein Z appears to assist hemostasis by binding thrombin and promoting its association with phospholipid vesicles. In this study, to characterize the gene for protein Z, its organization and structure were determined by a combination of PCR amplification of leukocyte DNA and isolation of phage clones from a human genomic library. The gene spanned about 14 kb and consisted of 9 exons including one alternative exon. It was of note that the gene organization was essentially identical to that of other vitamin K-dependent proteins, such as factors VII, IX, and X and protein C. The nucleotides in introns at exon/intron boundaries for eight regular exons were the consensus GT-AG sequences. In contrast, the sequence at an optional exon/intron junction was found to be GC rather than GT. The extra exon inserts a unique peptide consisting of 22 amino acids in the prepro-leader sequence. A similar situation was previously observed in factor VII, but not in other vitamin K-dependent plasma proteins. We also assigned the gene for protein Z to chromosome 13 by PCR amplification of genomic DNAs from human/hamster cell hybrids. Fluorescence in situ hybridization, employing a genomic clone coding for human protein Z, further localized the gene to band q34, where the genes of three other vitamin K-dependent proteins are clustered. These genes may have evolved via duplication of an ancestral gene at this locus.

A hydroxyl group at residue 216 is essential for catalysis by human thymidylate synthase.

Year 1998
Williams AW. Dunlap RB. Berger SH.
Department of Chemistry, University of South Carolina, Columbia 29208, USA.
Structural analyses of bacterial thymidylate synthases (TSs) implicate a serine residue corresponding to Ser216 in human TS in hydrogen bond networks that are involved in binding of the nucleotide substrate, 2'-deoxyuridylate (dUMP), and that stabilize a beta-bulge in the protein. Utilizing site-directed mutagenesis, 12 mutant proteins were created with substitutions at residue 216. DNA complementation studies utilizing a TS-negative bacterial strain revealed that only one mutant, Thr216 TS, supports the growth of the bacteria in the absence of thymidine. Kinetic characterization of the mutant proteins revealed that all TSs except Thr216 TS exhibited kcat/Kms for dUMP that are 10(3)-10(4) times lower, relative to that of wild-type TS. In addition, Thr216 TS was the only mutant to bind the mechanism-based inhibitor, 5-fluoro-2'-deoxyuridylate (FdUMP), into a ternary complex. Ligand binding studies revealed that Kds for dUMP binding to two defective mutants, Ala216 and Leu216 TSs, are 12-16-fold higher than that of wild-type TS. The data are consistent with the hypothesis that serine at this relative position is involved in dUMP binding; however, the data indicate that Ser216 has effects on catalysis, in addition to effects on dUMP binding. Catalysis is initiated by nucleophilic attack of the active site cysteine of TS on dUMP. The reaction rates of cysteine residues with the sulfhydryl reagent 5,5'-dithiobis(2-nitrobenzoic acid) were slower for Ala216 TS than for wild-type TS.
108
Версия для печати
Источник: https://gastroportal.ru/science-articles-of-world-periodical-eng/biochemistry.html
© ГастроПортал
Перейти в раздел
Zhonghua Yi Xue Yi Chuan Xue Za Zhi
[The relationship between p53 mutation and esophageal cancer biological behavior]He Y. Li M. Shang…
Zhonghua Yi Xue Za Zhi (Taipei)
Tracheal agenesis with multiple congenital anomalies: a case report.Year 1998Wang CM. Chen SJ. Lu…
Z Gastroenterol
Quantification of hepatitis C virus RNA by RT-PCR in comparison to the branched DNA method.Year…
Zentralbl Gynakol
[Echinococcosis--case report and review of the literature]Year 1998Moller S. Kairies M. Krause… 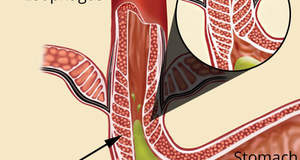