Year 1998
Hino K. Moriya T. Ohno N. Takahashi K. Hoshino H. Ishiyama N. Katayama K. Yoshizawa H. Mishiro S.
Second Department of Internal Medicine, National Defense Medical College, Saitama-ken, Japan.
A total of 107 hepatitis C virus (HCV)-infected pregnant women were screened for GB virus C (GBV-C) RNA in their sera, and 11 (10.3%) were positive. Among 11 infants born to these HCV/GBV-C co-infected mothers, GBV-C RNA was detected in 7 (63.6%) while HCV RNA was found in 1 (9.1%) within 1 year after birth: this difference was statistically significant (p = 0.023). The mothers of infected infants had significantly higher serum titers of GBV-C RNA than those of uninfected infants: 10(6.7 +/- 0.5) vs 10(4.0 +/- 1.0) copies/ml in average (p = 0.001). The baby in whom HCV RNA was found was also positive for GBV-C RNA, and had an elevation in serum transaminase levels, whereas all the other GBV-C infected infants showed no evidence for hepatitis. A family study, performed on 2 of the 7 infected cases, revealed that all the elder siblings of the index infants were also GBV-C RNA-positive. Nucleotide sequence of GBV-C RNA, amplified by PCR from an NS3 region, was completely identical between the mother and the infant within each family, but varied significantly across different families. These results suggest that GBV-C is more easily transmitted from mother to infant than HCV, although hepatitis is not caused thereby.

Molecular cloning of an Australian isolate of hepatitis C virus. 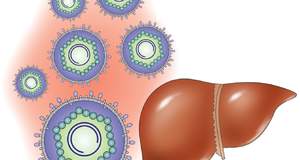