Year 1998
Nijevitch AA.
Children's Republican Hospital, Bashkortostan, Ufa, Russia.
The objective of the present work was to study the relationship between intragastric urea hydrolysis generated by Helicobacter pylori urease and acid-peptic disease in childhood. Intragastric urease activity was examined by urea and ammonia concentration measurement in gastric juice in 91 children with upper abdominal complaints. Helicobacter pylori infection was detected from 70 (76.9%) of 91 patients, including all of the 15 subjects with peptic ulcer disease. Helicobacter pylori-related gastritis in children was associated with a decrease of urea and an increase of ammonia in gastric juice (P < 0.001) in comparison with H. pylori-negative children. The gastritis score was correlated with the concentrations of urea and ammonia in the gastric juice of patients infected with H. pylori. There was a significant correlation between the histologically detected dissemination of organisms and gastric ammonia levels. Similar results were obtained concerning correlation between gastric juice ammonia and anti-H. pylori specific immunoglobulin G versus highly purified antigen of H. pylori containing urease. Present findings prove that H. pylori plays an essential role in the pathogenesis of gastritis and that ammonia is one of the main pathogenic factors of acid-peptic disease.

Comparative efficacy of cefixime and ampicillin-sulbactam in shigellosis in children.

Year 1998
Helvaci M. Bektaslar D. Ozkaya B. Yaprak I. Umurtak B. Ertugrul A.
Department of Pediatrics, SSK Tepecik Teaching Hospital, Izmir, Turkey.
Shigellosis is still an important health problem in developing and underdeveloped countries as it is resistance to commonly used antibiotics including ampicillin, trimethoprim-sulfamethoxazole, chloramphenicol and tetracycline. Between May 1996 and October 1996, in a prospective randomized double-blind trial, cefixime was compared with ampicillin-sulbactam, both given orally for a period of 5 days, for the treatment of 80 children with acute bloody diarrhea. Forty patients were treated with a single-dose (8 mg/kg per day) of cefixime and the other 40 patients were given three doses of 100 mg/kg per day of ampicillin-sulbactam. After identification of Shigella organisms in stool specimens, nine patients in the cefixime receiving group and six patients in the ampicillin-sulbactam receiving group were excluded from the study. Differences in average age, sex and weight between the cefixime and ampicillin-sulbactam group were statistically meaningless (P > 0.05). Fever and bloody diarrhea were universal features. The efficacy of cefixime was found to be better than ampicillin-sulbactam. Patients given cefixime had a shorter duration of fever (P < 0.01), shorter duration to disappearance of blood in the stool (P < 0.01), reduced time with diarrhea (P < 0.01) and reduced hospitalization time during the 5 study days (P < 0.01) than patients given ampicillin-sulbactam. No adverse effects were observed in the two study groups. This controlled trial showed good efficacy with cefixime compared to ampicillin-sulbactam in the treatment of shigellosis. Single-dose daily oral therapy with cefixime also showed good tolerability. Cefixime should be considered as an alternative drug of choice for shigellosis in children.

Hypokalemic paralysis in association with acute gastroenteritis: a report of a sporadic case.

Year 1998
Kinik ST. Secmeer G. Kanra G. Ceyhan M. Ecevit Z. Halit K. Oksuz N.
Department of Pediatrics, Hacettepe University, Samanpazari, Ankara, Turkey.
Hypokalemic periodic paralysis is a condition, characterized by episodic weakness of the skeletal muscle. It may be presented as familial or sporadic (secondary). In sporadic cases, the patient may present with paralysis without any previous self or familial history. It is known that these patients are more susceptible to hypokalemia than normal individuals. In low serum K+ concentrations that the normal population can tolerate, these patients may easily suffer from paralysis. A sporadic case of hypokalemic quadriparesis associated with acute gastroenteritis without any self or family history is reported. The patient had experienced two episodes of quadriparesis within a short interval and responded dramatically to potassium replacement therapy.

Year 1998
Tazawa Y. Nishinomiya F. Abukawa D. Aikawa J. Ohura T. Tohma M. Watanabe A. Suzuki T. Takada G. Konno T.
Department of Pediatrics, Akita University School of Medicine, Japan.
Neonatal intrahepatic cholestasis is a heterogeneous disease of undetermined cause. There is an unreported subset of idiopathic neonatal intrahepatic cholestasis with an unusual histological combination of hepatic siderosis and macrovesicular steatosis. The patients were a 34-day-old female and a 39-day-old male with normal birth weights. Their mothers had received oral iron supplement 4-6 weeks before delivery. The patients had obstructive jaundice noticed at the well-baby clinic at 1 month of life. They had high levels of serum galactose and tyrosine, hyperferritinemia. Urinary organic acid and bile acid analyses were negative, and galactose-1-phosphate uridyltransferase activity in red cells was normal. Liver biopsies showed diffuse iron deposits and macrovesicular fat. By substituting formula milk with lactose-free milk, the patients responded, and had normal biochemical tests within 5 months of life. Follow-up biopsies, at the age of 12 months, showed mild residual fibrosis without iron or fat deposits. They are both well at 3 and 6 years of age, respectively, without biochemical liver dysfunction and neurologic impairment. Prenatal iron-overload might contribute to the pathogenesis of the disease, but further studies are needed to confirm the assumption.

Uncommon multisystemic involvement in a case of Henoch-Schonlein purpura.

Year 1998
Kano K. Ozawa T. Kuwashima S. Ito S.
Department of First Pediatrics, Dokkyo University School of Medicine, Tochigi, Japan.
A case of Henoch-Schonlein purpura (HSP) characterized by several unusual complications is reported. A 10-year-old boy was hospitalized with acute abdomen and developed purpura on the lower extremities after 4 days of hospitalization. He had protein-losing enteropathy, diagnosed by an elevated fecal alpha-1-antitrypsin clearance. The colicky abdominal pain and protein-losing enteropathy subsided after methylprednisolone pulse therapy was administered. He had left hydronephrosis and gall-bladder abnormalities detected by ultrasonography, and purpura nephritis. However, after improvement of these abnormalities, he showed steroid-induced epidural lipomatosis, detected by magnetic resonance imaging, which resolved with steroid reduction. Ultrasonography and magnetic resonance imaging were useful for detecting these uncommon multisystemic involvements in HSP. 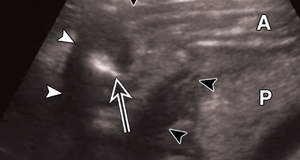